Benefits | i-Float in the county

Find out why floating is so important for physical and mental wellness.

Habitual clients and advocates of sensory deprivation will tell you that the longer you float, the better it gets and the more your body rebuilds. In the Isolation Tank, there is no need to fight gravity or deal with sensory input, which allows your body to reallocate that energy. Some people float to relieve stress and significantly reduce anxiety, some float to eliminate chronic pain, while others float to fight addiction–and all experience true relaxation, allowing muscles to fully release and expedite recovery. 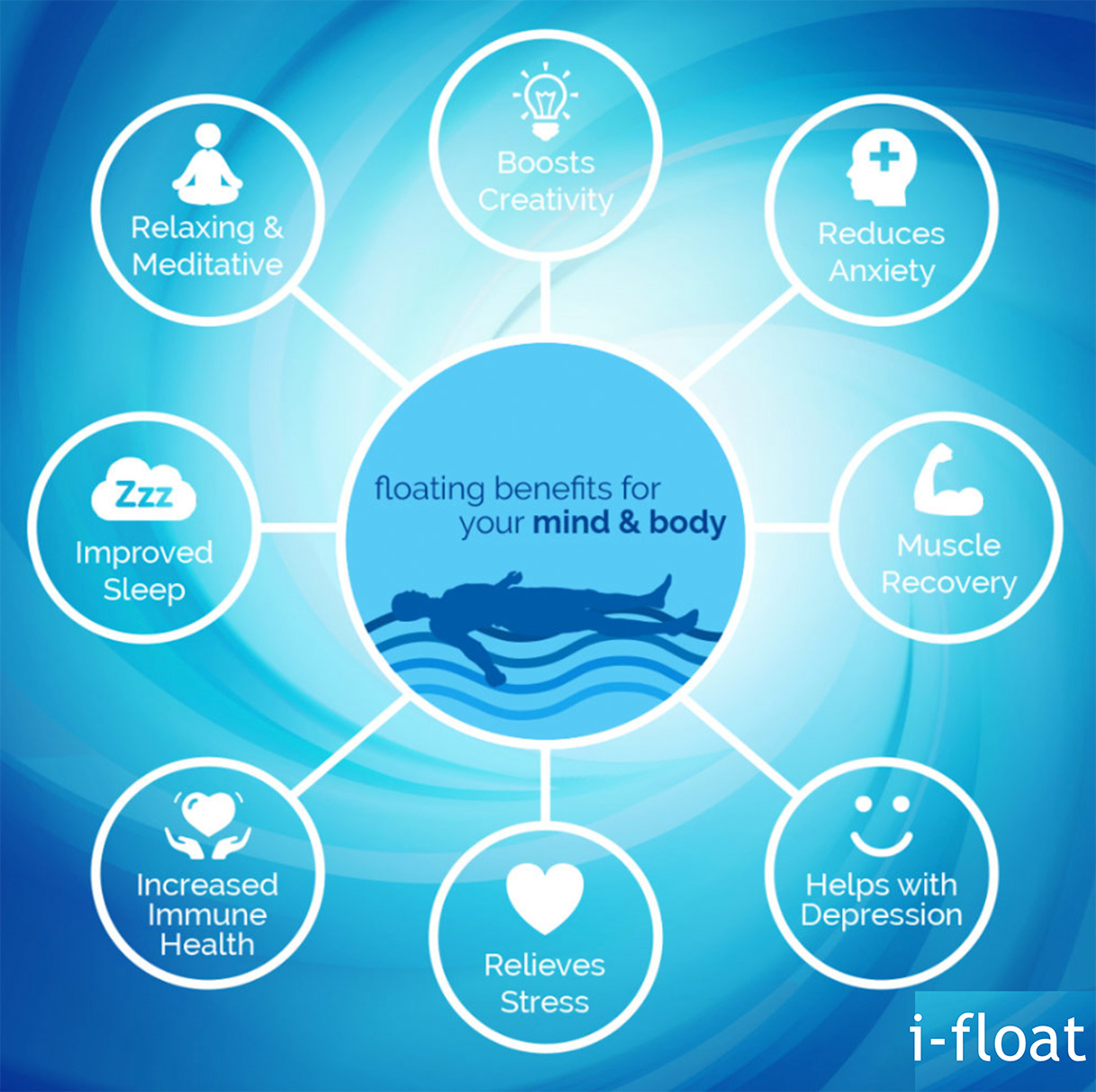 The lack of sensory input has an amazing effect on the nervous system. Floating affects the brain by greatly reducing the “fight or flight” chemical known as cortisol. This reduces stress while elevating the “happy” neurotransmitters in the brain. The body’s circulation is increased while blood pressure and heart rate are reduced. Furthermore, the elimination of gravity on the body allows muscles and joints to release tension and heal more rapidly. For this reason, people suffering from musculoskeletal and rheumatic conditions have found relief.

One hour of floating is equivalent to four hours of restful sleep, and helps to eliminate jet lag and fatigue. A float session promotes a sense of general well-being, often called the “Post-Float Glow.”

Research on floating has indicated it is an effective tool for relieving back and neck pain, inflammation, bursitis, fibromyalgia and past injuries.

Further, the pain relief has been shown to continue after getting out of the tank. Floatation therapy allows the spine to lengthen and removes pressure from the joints while enabling greater blood flow to reach affected areas of the body. Increased levels of endorphins — the body’s natural pain killers — are released into the blood stream, which help block the transmission of pain signals at the cellular level.

Athletes use flotation to improve their performance, to speed their recovery from the stress of peak output, and virtually eliminate fatigue and “post-race letdown” from competitions.

Floating weightlessly provides relaxation benefits that decrease production of stress-related fight-or-flight chemicals and virtually eliminate lactic acid buildup and other fatigue-producing toxins, allowing the body to recover to peak efficiency and strength for the next go-around.

Floating has been shown to accelerate recovery from the stress of competitions and eliminate post-competition letdown.

What normally takes a long period of time — usually days for recovery from a strenuous event like a marathon — the float tank compresses into a number of hours. By relieving the stresses of gravity, floating takes the weight off strained bones, joints and muscles, and increases the efficiency of the blood circulating through the body.

Whether you’re looking to take a few strokes off your golf game, plot out a business strategy, or become acquainted with your deep self, the isolation tank is the best environment for this practice.

Inside the float tank, you are given a pitch black canvass and no one is around to tell you how to paint. As the brain enters the theta state, it becomes more open to suggestion. The central nervous system can essentially be trained to produce the “perfect performance.” The technique has been used by members of Olympic teams for many years in countries such as Australia, Europe and America. Well-known athletes like Carl Lewis have attributed part of their success to visualization within the float tank.

Experts from sporting and medical institutions have carried out research in controlled experiments. The quantifiable results have even led some to claim that an hour in the float tank using visualization and imagery is better than 10 hours of repetitive field practice. NFL teams have improved performance and coordination through visualizing, while lawyers act out their opening statements and mixed martial artists imagine their victories. Side effects may include increased concentration, confidence and poise.

Floating is a great way to gain greater awareness of patterns of behavior.

Floating has been shown to have beneficial effects such as decreased anxiety and depression and increased calmness or sense of well-being. Floating has shown fantastic results in anti-smoking assistance and positive effects on weight-loss programs. 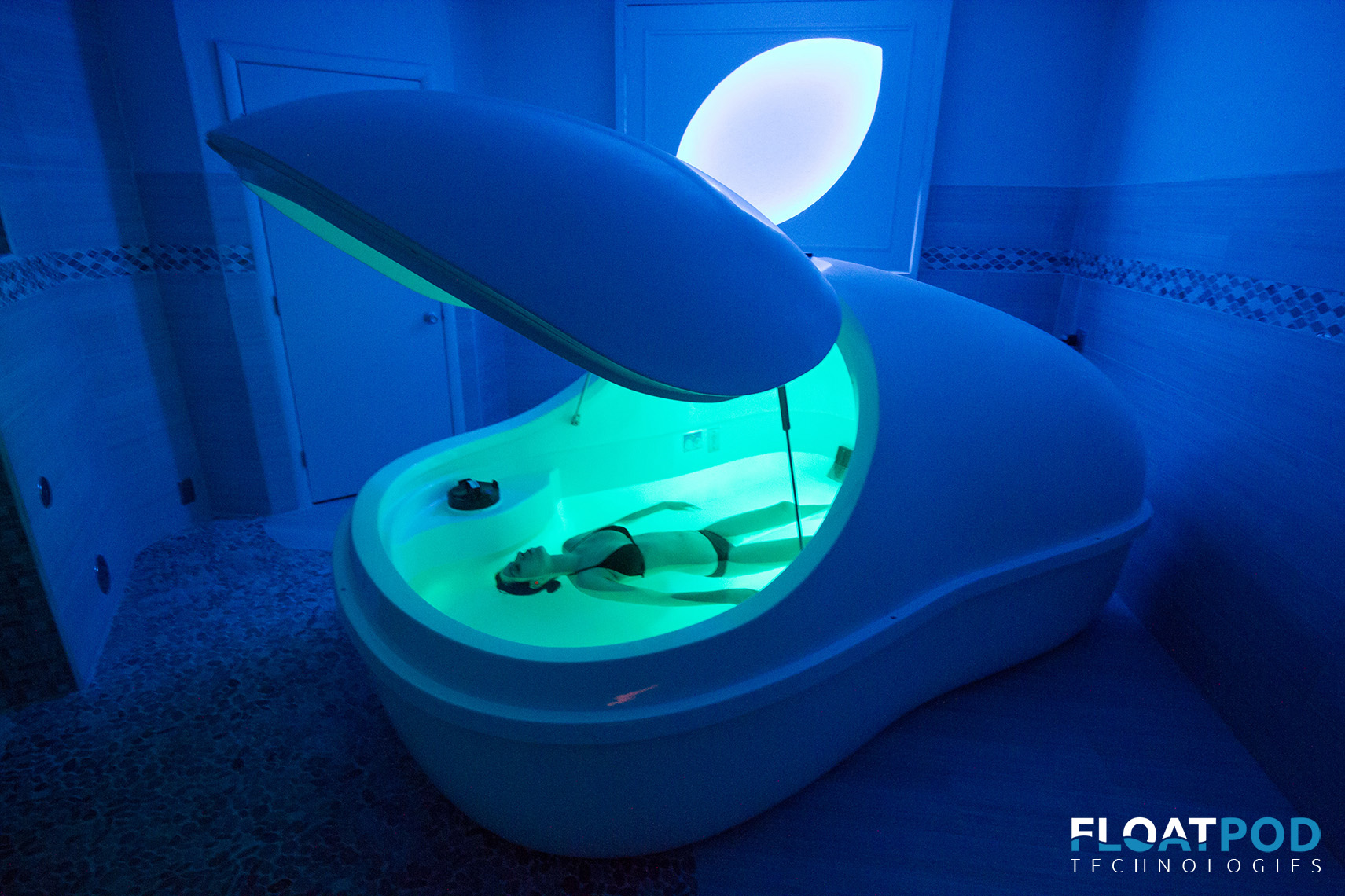 While in the theta state, the mind is capable of deep and profound learning, healing and personal growth.

A typical float tank therapeutic session lasts 60 to 90 minutes, but in some cases the person floating can achieve an induced meditative state in 20 minutes which would ordinarily take many years of meditation practice to achieve. Reaching this state can then lead to a transition from beta or alpha brainwaves to theta brainwaves, which typically occur briefly before sleep and again at waking.

The theta state offers access to unconscious materials and allows for freer associations, sudden insights and bouts of creativity.

Research into brainwaves indicates that floating increases right brain function. The right brain is known as the creative hemisphere and the source of flashes of insight-–the Eureka moments!

Top executives and entrepreneurs have used float tanks as a source of innovation. Research into the brain waves of floaters indicates that floating increases right-brain function. Thomas Budzynski, who was engaged in EEG measurement of the brain hemispheres under varying conditions, made it clear that, “In a float condition, left-hemisphere faculties are somewhat suspended, and the right hemisphere ascends in dominance.” The tank does not block or inhibit the left hemisphere, but simply changes its role from one of dominance to one of partnership with the right hemisphere, enabling floaters to use all their mental powers. Synchronization of brain waves–hemispheric harmony–is one explanation for the great increase of productivity, performance and efficiency, and the generalized feelings of competence, confidence and wholeness experienced by floaters.

High concentration of Epsom salts is absorbed through skin and can replenish magnesium, a mineral in which many people are deficient.